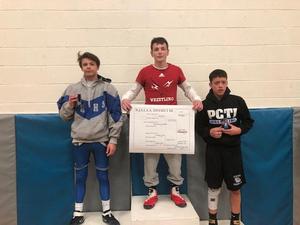 Please click on the link to read more!
The Falcon Wrestling team, led by Senior Christian Mendoza, Senior Angel De los Santos, and Junior Peret Shed made huge improvements this year with 8 team victories and multiple individual awards. In the opening of the season the falcons completed in two tournaments with Shed earning 2 gold, Mendoza earning a silver, De los Santos and Jawad Alomari both earning a bronze. During the season, the Falcons wrestled in the Passaic County Tournament where Shed won the bronze in the varsity tournament. On the junior varsity side of the tournament Benny Silvestro and Nasir Brown both earned gold, Sauzer Ayoub won silver and Alomari won the bronze. At the end of the season Manchester competed in the District III Championships where a 33-1 Peret Shed took the gold. Shed will continue his run for the States this Saturday at the Region I Tournament at West Milford High School.