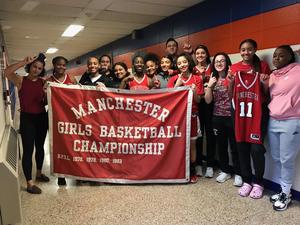 Falcon's Girl's Basketball has had a banner season this Winter!  The team now holds the best Girl's Basketball record in MRHS history (20-4).  Furthermore, the team had the first county tournament win in two decades.  Also, Jasmine McDuffie became the fourth female player in MRHS history to score 1,000 points and was also named the first Bergen Record/Northjersey.com female athlete of the week since 2004!  Jasmine was also named the NJ.com NJIC basketball player of the week.  Moreover, Shani Gerald now holds the school record for three point shots in a game and is ranked #1 in the county and #2 in the state. Finally, Mr. Sposato earned his 100th career win coaching the team this season.  MRHS is grateful for this incredible Winter season, team of athletes, and our coaches who ensure the success of our youngsters.